JEGONG is the amalgamation of two distinct forces within post-rock and heavy music, Dahm Majuri Cipolla, drummer of MONO (Japan) & Watter, and Reto Mäder of Sum Of R. Together the pair is readying their debut longplayer I for release on October 20th via Berlin-based Pelagic Records, helmed by members of beloved post-metallers The Ocean. Bursting with new ideas while tipping their hat to legends of yore, the duo’s energies focus on the crossroads between Krautrock, ambient and post-rock, bringing to mind acts ranging from Ash Ra Tempel, GAS, Cluster, Mogwai and more while blazing trails with their electronic-forward approach.

Watch the JeGong's "Stable Off" VIdeo At This Location.

Please find preorder options Here
JEGONG, named in tribute to a track by Cluster’s Dieter Moebius, was formed by shared musical influence and a friendship developed during a European tour when Sum Of R and Cipolla’s band Watter intersected during the former’s routing towards the highly respected European festival Roadburn. During their encounters, the pair  bonded over the musical output of the early 70s, specifically the intersection of electronic music and boundary-pushing

experimentalism found in Krautrock that gave rise to classic acts like Can, Faust, Tangerine Dream, Neu! and more. In this spirit, if not also musically, is where the soul of the JEGONG project lies– melodic, genre-pushing, fascinating and honoring the past while looking toward the future.
The classic Krautrock movement may provide the bedrock for all that is JEGONG, but the project is far from a “worship” band. Instead of aping core elements of the movement, the duo used the style as a launch pad to move into uncharted realms– thereby conjuring the original, truly bold spirit of the style. The result is a record without inhibition– delving deep into psychedelia, ambient, repetition, post-rock and even elements of dystopian sci-fi soundtracks like Blade Runner and Metropolis during the LP’s 70+ minute runtime. "With JeGong we don't want to copy the Krautrock style,” reiterates Mäder. “We see our project more as a creative playground to celebrate the playful and experimental approach from earlier Krautrock using organic sounds and textures from analogue sounds to explore mood.” 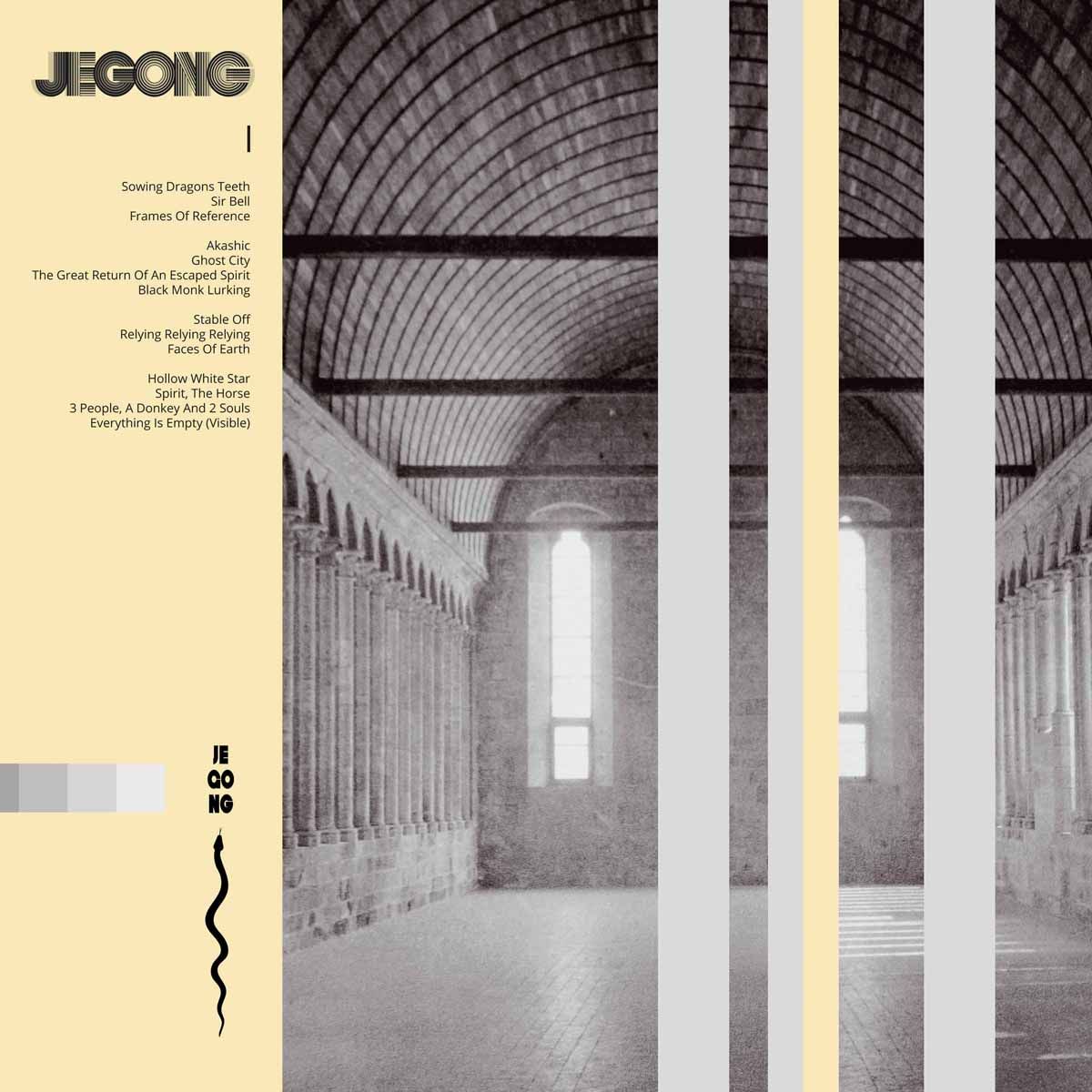 Created in the tail end of 2019, the LP was an exercise in social distancing with Reto Mäder recording all of the instrumentation at Hinterzimmer in Bern, Switzerland and Dahm Majuri Cipolla adding in the drums at BC Studio in NYC with Martin Bisi (Swans, Sonic Youth), here it was also partially mixed. With additional mixing and mastering taking place in Finland with Jaakko Viitalähde (Oranssi Pazuzu, Dark Buddha Rising), the wholly remote record presented a challenge in creating a collaborative effort while separated by half a world at every turn. “It was pretty interesting doing the tracks separated by many many miles between Switzerland and the U.S.,” recalls Cipolla. “For this particular collection of songs Reto would send me these ideas and I would come up with rhythmic patterns to fit. We wanted a combination of atmospheric sounds/progressions over rhythmic pulses and minimal, and sometimes repetitive, drumming.” And though the pair never shared a room, that also had it’s advantages as well. “You pay much more attention to sound as a common language,” explains Mäder. “Music takes on different forms according to the conditions in which it was recorded– whether that’s rooms, distance and time. We’re excited to also showcase another form of our songs–bringing them to the live stage."

Consisting of 14 tracks, the debut effort from JeGong is emblematic of the adventurous spirit at the dawn of electronic music converging with the wide-eyed wonder toward experimentation found at the height of the psychedelic movement. Using processed guitars and heavily manipulated synths, Mäder creates vast atmospheric architecture in which Cipolla’s tasteful yet propulsive percussion adds a backbone and the unexpected twist. The combination pays homage to the greats of yesteryear while adding influence from artists ranging from Grouper to Sunn 0))) to Zombi. JEGONG not only tips its hat to the Krautrock era, but also reimagines the movement with new approaches and updated ideas. “To me, it’s about our mutual love for 70’s German music without being blatant about it,” comments Cipolla..”It’s a tribute but it’s done our way– honoring these heroes in the only way we can.”
FOR FANS OF: Ash Ra Temple, Gas, Cluster, Can, Neu!, Ennio Moricone, Stars Of The Lid, Earth, Mono,This Will Destroy You, Labradford